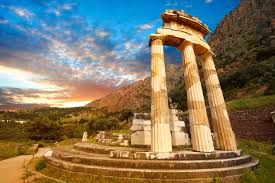 This section will serve to highlight archaeology discoveries currently highlighting the Hellenic World as we have imagined it. Click on Links to view the whole article:

“Archaeology is fundamentally the study of humanity and its past. Archaeologists study things that were created, used or changed by humans. They do this by studying the material remains — the stuff we leave behind, such as lithic tools, a simple hut dwelling, a skeleton covered with gold jewelry or a pyramid that majestically rises from a desert floor. Sometimes, archaeologists study contemporary societies in order to shed light on those that flourished in the past.  Source

Archaeology in the News

Behold 3D Recreations of Pompeii’s Lavish Homes–As They Existed Before the Eruption of Mount Vesuvius, April 19, 2022

Decoding Linear A, the Writing System of the Ancient Minoan, March 30, 2022

Unanimous approval for the relocation of antiquities, March 11, 2022

Restoration works to continue at the ancient theater of Dodoni, February 18, 2022

Travels to the ancient city at Vlochos, Palamas, February 9, 2022

Preliminary results of the excavation on the hill of Kastelli in Chania, February 8, 2022

Upgrading the site of the Sanctuary of Artemis at Aulis, January 27, 2022

A Long-Overlooked Necropolis in Naples Reveals the Enduring Influence of Ancient Greece, January 13, 2022

Ancient Greek Women Who Left Their Mark in History, January 7, 2022

Two Shipwrecks Found Off the Coast of Israel, December 23, 2021

The Secrets of the Ancient Neighborhood Beneath the Acropolis, November 27, 2021

Antikythera shipwreck: the new results of the underwater survey, November 8, 2021

Ancient shipwreck off Peloponnese had a cargo of amphorae, October 25, 2021

Therasia: the new excavation finds from the prehistoric settlement, October 22, 2021

Coins from Roman times: The silver treasure of Augsburg, October 20, 2021

Digging deep to unlock the past and future in Santorini, September 26, 2021

‘It’s exactly like a puzzle’: experts on piecing together Roman fresco find, September 3, 2021

The Best Kept Acropolis Secret is Inside the Sacred Rock, May 21, 2021

Underwater archaeological site to open next month, May 18, 2021

‘A vast underwater museum’: Greece plans to open shipwrecks and other submerged heritage sites for visitors to explore, May 17, 2021

Open letter to the PM: Thessaloniki metro antiquities in peril, May 16, 2021

Excavating Hippos and the Last Roman Theater in the World, May 14, 2021

Ancient Cemetery for Infants Discovered on Greek Island, May 3, 2021

Before the Ruins. See what Ancient Knossos Palace looked like in its Glory Days, May 2021

These frescoes adorned the oldest extant Christian house church, May 1, 2021

New Finds In Aegae, The Royal Metropolis Of The Macedonians, April 23. 2021

The Acropolis Of Amphipolis And Its Secrets, April 22, 2o21

Grave Of Gothic Warrior Buried With His Weapons Unearthed In Downtown Thessaloniki, April 22, 2021

Rome to open Largo Argentina site to visitors thanks to Bulgari, April 14, 2021

Is The Body Of Alexander The Great Actually In Saint Mark’s Tomb?, March 15, 2021

Discovered at a book launch: the curious case of Caligula’s coffee table, March 12, 2021

Statuette of Asklepios, bust of Serapis found in Kibyra, January 7, 2021

Biggest circular tomb in the ancient world to open in Rome, December 25, 2020

Figurines Of Demeter And Persephone Found At Construction Site In Russia’s Anapa, November 6, 2020

The Mycenaean Necropolis Of Trapeza, Aegion, Comes To Light, October 29, 2020

A Minoan harbour town The ancient site of Kommos in Crete, October 27, 2020

The Denouement of the Enigma of the Roman Mosaic from the House of Aion in Paphos, September 18, 2020

The mathematical values of Linear A fraction sign, September 7, 2020

New discoveries at the ancient Greek city of Smyrna in Turkey, August 10, 2020

Ancient Rome’s Finest Glass Was Actually Made in Egypt, August 5, 2020

New discoveries at the Underwater Park of Baia, June 23, 2020

Feast of snails and pig sheds life on Hellenist life in ancient Galilee, May 17, 2020

Amateur archaeologists redraw map of Roman Britain – from home, May 12, 2020

Turkey: Inscription unearthed in ancient city of Patara, May 7, 2020