The Center for Hellenic Studies at Georgia State is the only such program in the southeast and is unique for the wide range of events it wishes to sponsor. We imagine the Greek phenomenon in the very broadest terms, both historically and geographically. Even in antiquity, cities on the Greek mainland colonized seaside regions as far to the east as the coast of the Black Sea, as far to the south as Egypt, Libya and Tunisia, and as far west as the Cote d’Azur and southern Spain. The Italian peninsula, from Naples all the way to Sicily, was simply known as “Greater Greece” (Megali Ellada), so numerous and so wealthy were the Greek colonies there.

As in antiquity, so too in the modern period. It is worth recalling that Melbourne and Sydney in Australia, New York and Chicago in the US, Toronto in Canada, as well as London and Manchester in the United Kingdom are cities with some of the largest Greek populations after Athens and Thessaloniki and Patras on the Greek mainland.

Clearly, a thriving and dynamic Greek diaspora has always been one of the prominent features of the Hellenic world. We at the Center for Hellenic Studies are indebted to the generosity of the Atlanta chapter of that diaspora, and of the Greek government, for the generous gifts that made the establishment of this Institute possible. It is the financial and cultural commitment of such local communities, as well as the support of the Greek Consulate here in Atlanta, that enable programs such as ours to prosper and to expand the reach of our cultural and academic mission. 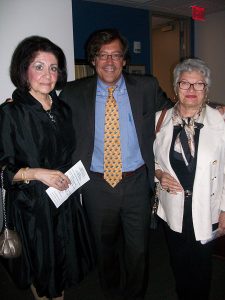 Louis A. Ruprecht Jr. is the inaugural holder of the William M. Suttles Chair in Religious Studies at Georgia State University. He joined the faculty in the fall of 2005.

Ruprecht received his Bachelors and Masters degrees from Duke University and his PhD from the Graduate Division of Religion at Emory University, where he specialized in Religious and Philosophical Ethics, with a concentration in ancient Greek materials. He also translated Greek drama with the late William Arrowsmith, one of the foremost English translators of ancient Greek poetry in a generation. Ruprecht was a Residential Fellow at the American School of Classical Studies in Athens in 1989-1990, thanks to the support of a Charlotte W. Newcombe Fellowship administered by the Woodrow Wilson Foundation. He also worked for five summers on the Greco-American excavation of a Hellenistic pirate harbor at Phalasarna, Crete (1988-1992). He was later invited to offer short seminars and lecture courses at the Ionian University on Corfu in 2002 and 2003.

Ruprecht has long been involved with other Hellenic Studies institutions in the United States. He was invited to participate in the University of Michigan’s Annual Platsis Seminar under the auspices of their Modern Greek Studies program in the fall of 2004. He was a Stanley J. Seeger Residential Fellow at Princeton University’s Program in Hellenic Studies in the fall of 2010, were he began research for a new book project entitled “Crete and Cosmopolis.” He delivered the 24th Annual Anna and Thomas Leontis Memorial Lecture for the Ohio State University’s Modern Greek Studies Program on March 29, 2012. He was most recently invited to offer a mini-seminar on the History of the Greek Olympics at the Portland State University under the auspices of their Department of History and Program in Hellenic Studies. He also offered two public lectures for Portland’s Hellenic Studies program in late July.

Ruprecht became the Director of Georgia State University’s Center for Hellenic Studies in July of 2012.