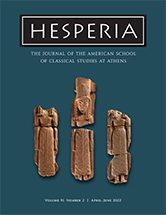 We are pleased to announce the publication of Hesperia 91.2! Topics in this issue include an examination of the evidence for the construction of the grave of the Griffin Warrior at Pylos, a 7th-century B.C. deposit of votive material at Anavlochos on Crete, stone tools from the Classical city-state of Halieis, and new digital visualizations for Antenor’s Tyrannicides statues in the Athenian Agora.

Subscribers can read the issue online at Project MUSE, which now hosts current issues of Hesperia as well as an archive of past volumes dating to 2002. Hesperia remains on JSTOR as part of their Arts and Sciences II package, with the usual three-year moving wall. Additionally, all issues of Hesperia from 2011 and earlier are available as Open Access on our website. The printed version will be mailed shortly.

Votive Keimelia from Crete: Homeric Perspectives on a 7th-Century Deposit of Curated Objects, by Florence Gaignerot-Driessen, details the fact that recent excavations at Anavlochos in eastern Crete revealed votive material, consisting mostly of female figurines, deposited in natural rock cavities of a mountain ridge. One cavity stands out from the rest of the deposit for its anomalous finds, which notably include a Minoan sealstone. The various offerings from this “sealstone cavity,” all curated objects, were probably deposited in the 7th century B.C. An examination of the use and meaning of curated objects (keimelia) in the Homeric epics shows that they could represent substitutes for a missing person.

Flaked Stone Tools and Domestic Economy in a Classical Polis: Lithics from the Lower Town at Halieis, Greece, by P. Nick Kardulias and Curtis N. Runnels, examine how an assemblage from the Classical city-state of Halieis in the southern Argolid demonstrates the continued use of lithics in historic periods. Such examples of worked stone from historic contexts have received less attention than objects made of other materials because of the reduced role for stone tools following the advent of metallurgy in the Bronze Age. The Halieis material, consisting largely of obsidian blades, with few cores and other production residue, reflects either primary reduction off-site and importation of finished tools or preforms, or recycling of older material. Despite the assemblage’s small size, the lithics reveal nuances of an underreported aspect of the ancient Greek economy.