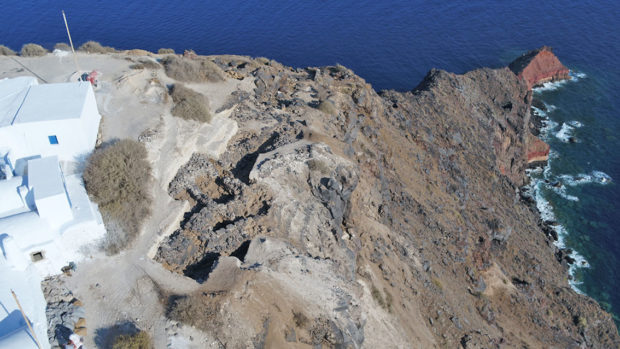 Therasia: the new excavation finds from the prehistoric settlement 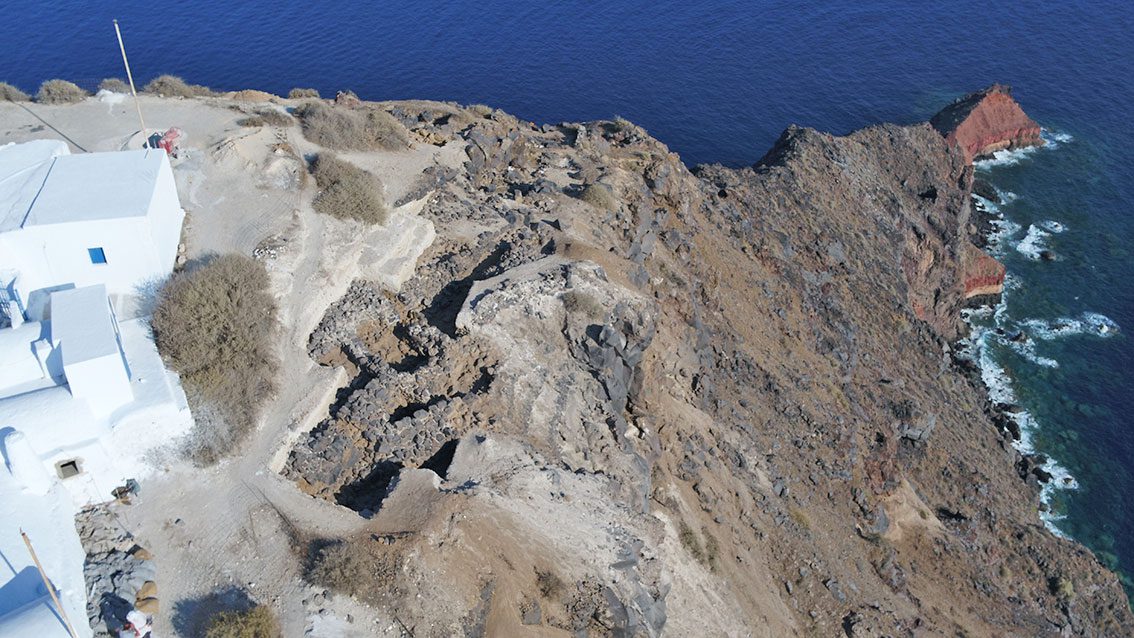 The 7th season of systematic excavation took place at the site of Koimisis on Therasia from the 4th to the 30th of August 2021. The excavation concerns the exploration of the Early Cycladic and Middle Cycladic settlements situated around the monastery of Panaghia Koimisis at the island’s southern tip, on the edge of the caldera cliff created by the great Minoan volcanic eruption of the 16th century BC (fig. 1).

During this year’s excavation season, the work focused on two spots. The first and most important was in the northwestern part of the settlement, where in the previous excavation period very strong retaining walls had been discovered at a height of almost two meters, two building interiors (X1, X2), one containing a bench, and an exterior courtyard also with a bench. The layers of lava and ash from the eruption of the Santorini volcano covering this part of the settlement remains contributed considerably to their being perfectly preserved (fig. 2). The above areas were thoroughly excavated thus clarifying matters of their form, nature and chronology, with the presence of both Middle Cycladic layers and Early Cycladic phases of different periods, which in some places possibly go back to the beginning of the Early Cycladic period. A new area was also excavated to the south, situated on the current edge of the cliff which indicated the extent of the slope collapse caused by the eruption. The latter area is connected through a door with a narrow elongated room of the Early Cycladic period. In 2019, near this door and almost on its threshold, a seal was found with fragments of writing.

The interior of the building with the bench (Area 2/ X2), where there was an extremely important Middle-Cycladic deposit, yielded the greatest surprises. Completing the excavation of the area to the north and east, it was found that it is a second elliptical building following the one discovered earlier in the southeastern part of the settlement. Overall, it has the same monumental form and similar orientation, while the arch is encased in two stone piles to its left and right, very probably for the purpose of its retaining (fig. 3). The building is significantly larger, preserved at a greater height and has a transverse structure that takes up the arch’s end.