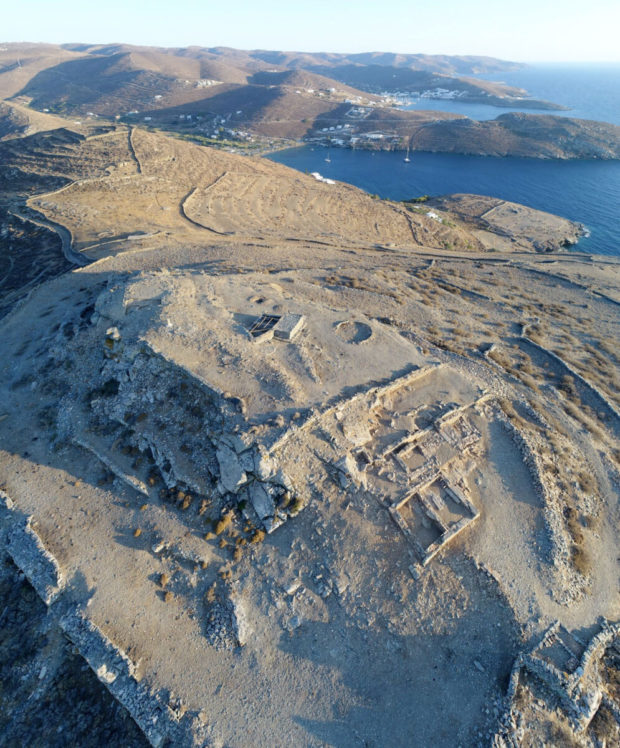 The collaborative excavation at Vryokastro, Kythnos, led to significant results this summer (excavations having begun by the university in 2002). It was conducted by the Archaeology Faculty of the Department of History, Archaeology and Social Anthropology of the University of Thessaly and the Cyclades Antiquities Ephorate of the Ministry of Culture and Sports. The first season of the new five-year excavation programme (2021-25) lasted six weeks (June 2-August 7). The site has been identified as the ancient city of Kythnos, first inhabited during the Early Cycladic period (3rd millennium) and then again continuously from the 12th century BC to the 7th c. AD (fig. 1). This year’s work focused on the excavation of buildings on the acropolis of the ancient city. Extensive clearing of vegetation and removal of scattered stones preceded it, allowing numerous architectural remains to be identified.

Both the nature of the remains and the sparce finds allow us to speculate that the southern part of the acropolis was intended for housing perhaps of a military nature. Two building complexes were partially excavated (Buildings 1 and 2) (fig. 2) which seem to have been constructed in the Early Archaic years and remained in use until at least the Hellenistic period. Here it would be possible to search for the headquarters of the Macedonian guard established on Kythnos in 201 BC by Philip V.

Τhe North part of the plateau on the other hand is occupied by a sanctuary which since the period of surface survey in the 1990s had been identified as Demeter’s (fig. 3-4), based on the nature of the surface finds.

This year, four buildings were discovered in the sanctuary (no. 3-6) and a retaining wall to the East that connects Buildings 3 and 4. Building 3, which is 21 meters long and 8.50 meters wide, with trapezoidal masonry and a monumental entrance in the middle of the elongated North wall, dates to the Classical period.

The inside of Building 3 has not yet been fully explored, and therefore neither its interior layout nor its use is yet known. It is noteworthy, however, that most of the votive offerings of the sanctuary come from the backfilling of the abandoned building.